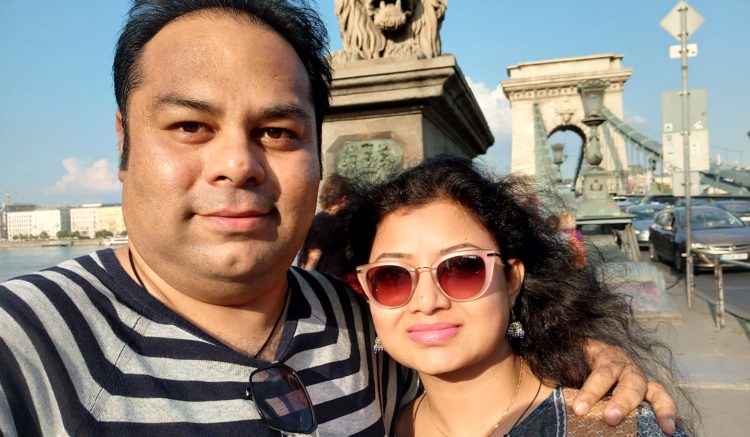 What can you do in Budapest in 1 Day!

This is Michael along with my wife Sudehsna sharing our experience of visiting Budapest. Here is our Travelogue and Vlog on our amazing trip to Budapest – we been there in August summer of 2017. We flew from Rome to Budapest by Ryanair and stayed in an AirBnB. There are very few options to reach the city-center from Airport, like using the ‘bus + metro’ option or taking a taxi. We chose to take a taxi to save time, it won’t cost much and easiest way to find your accommodation, especially if you are not too familiar with Europe. Also, it’s highly recommended to use the Budapest Card, which allows you to visit number of places either for free or with discount and you get the public transportation free. Know more about the Budapest Card here. Please note that, we are sharing the info of these service providers because we have personally used them in our trips and fully satisfied with their service.​ 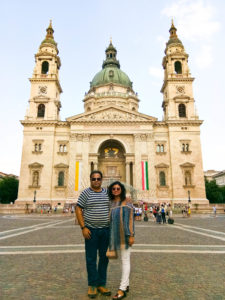 Budapest is one of the most beautiful twin-cities in the world and it is the capital of Hungary. Why I called it twin-cities? Well, many people don’t know that, Buda and Pest are two cities cleaved by the river Danube. It’s the Chain Bridge – the longest suspension bridge in Europe and the first permanent bridge across the Danube in Budapest, built in 1839 – 1843 connects both the cities. The easiest way to make out which one is Buda and which one is pest – the famous Parliament is situated in the Pest side at the bank of river Danube and Buda side is where the funicular runs up to Castle Hill at the Buda’s Old Town, where the Budapest History Museum traces city life from Roman times onward. Pest is more touristy, crowded and loud, whereas, Buda is hilly, less-crowded and clam, that’s another visible difference between both the cities. 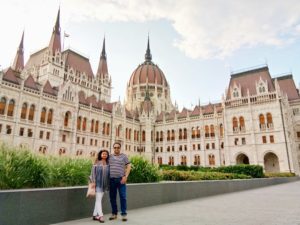 Budapest is also one of the cities hold a grave history of the world war 2, there are many memorials across the city in both side reminds us the horror of the war. However, the city has emerged from ashes and now, stood up as one of the most visited destinations in Europe, that boast for its great food, amazing architectures including the ones were destroyed during the war and rebuilt again. Budapest is indeed dream-place for youth as its very lively, museums all around, great transport system, lovely weather and much more to add in the list. 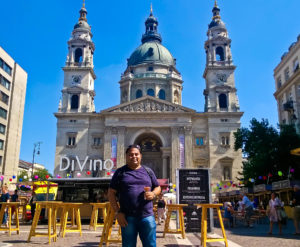 As I been to Budapest before as a solo, I knew where to stay – I chose the AirBnB near the city center almost behind the famous Jews Synagogue by guessing from the AirBnB map, thus, we began our day visiting the Synagogue, but from the outside, because we were very hungry and also needed to buy groceries (veg and meat) to use the beautiful kitchen at the AirBnB for dinner. We looked at the Synagogue from outside and headed for the famous Budapest Central Market Hall aka Great Market Hall. 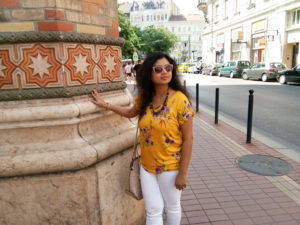 The Central Market Hall is one of the must-do places for any foodie. The market is situated at the Pest side and was built between 1894-96 before it caught fire and got reconstructed by 1897. The market is beside the river Danube, naturally because, in those days vendors used to supply products through the river route only. 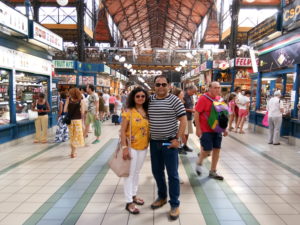 The market is divided in two parts – ground floor and a top floor as you can see in the photo and the Vlog. The ground floor has stalls for all kind of things – fruits, vegetables, meats and everything. And, the top floor has number of eateries, preparing and serving hot Hungarian dishes. It doesn’t matter if you don’t understand the name of the dishes or can’t pronounce them like us, just look at them and let your heart desire for the most attractive one from the display and you just point out the one to the person at the counter and get your food delivered hot ready to eat or parceled. Oh Yes, food is bit pricey at the market compare to any street side normal restaurant, but come-on, you are on a Europe trip and standing at the historic place of Hungarian food-scene, you have to eat there. You can see the pic that we couldn’t wait to bring them to the house, but had the delicious preparations right there with great delight. Please click here to see the Vlog. 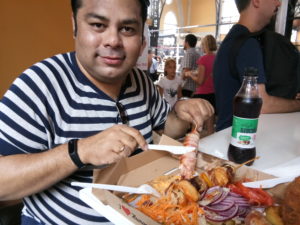 As we came out of the Central Market Hall, our eyes got caught by the glorious Liberty Bridge standing tall and smiling at us from above the river Danube just few meters from the market. Though, Budapest is known for great weather and quite cold during the winter, its absolutely opposite in August. Yes, it feels like hotter than India in that period of time. But, we were in the spirit of travelling, so gave a quick visit to the liberty bridge – the famous ‘green bridge’ in Budapest is one of the eight bridges above river Danube connecting Buda and Pest. 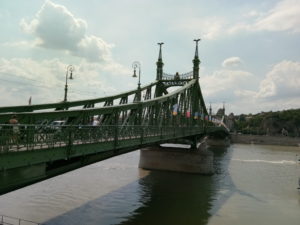 It was afternoon by then and the sun was at top of our head, so we had to run back to the house for a short break. On the way back, we took a beautiful walking allay and enjoyed attractive street arts and statues. 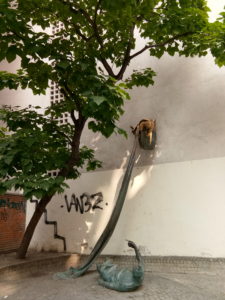 After a short power-nap, we headed for the Chain Bridge, one the main attractions of Budapest. The story goes by this behind the construction of the bridge: ‘A very wealthy man, count István Széchenyi couldn’t reach at his father’s funeral because of very bad weather, he couldn’t cross the river on ferry – so understanding the need of a bridge immediately, he commissioned to build the Chain Bridge.’ It is the longest suspension bridge in Europe and the first permanent bridge across the Danube in Budapest, built in 1839 – 1843 connects both the cities. The bridge was designed by the English engineer William Tierney Clark and the chief engineer was a Scotsman Adam Clark. 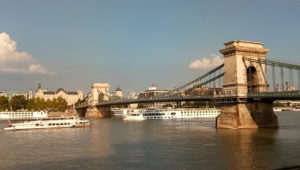 It is wonderful to walk over the Chain Bridge in the early evening when the weather cooled down a bit and pleasant wind took over the city. We crossed the bridge walking from Pest side where we stayed and went on to the Buda side, check out the Vlog. As I have mentioned earlier, the Buda side is less crowded and calm, we had a lovely walk at the other side of the river-bank. 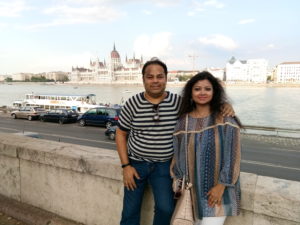 While walking by the river, we noticed the Ferries hopping each side of the river Danube taking and releasing passengers at the respective docs. We realised that we have the Budapest Card and we can certainly take on of those public ferries (not the private ones) to experience the river Danube cruise. It was like a moment of great joy to realise that there public ferries too as we earlier thought those are all private cruises only. We ran to one of the nearest docs and got in to the line. In no time one ferry arrived to our side. We showed our card and hoped on the ferry, after couple of minutes we realised the ferry is going to the opposite side right in front of the Parliament. We decided to get off there and have a look at the huge and famous Parliament of Hungary. 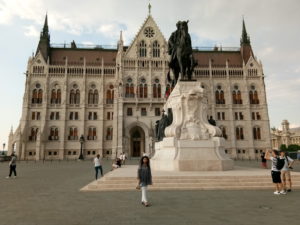 As it was evening, the parliament was close. But, it was wonderful to around the Parliament, in fact, its probably the only area in the Pest side which is quite calm. You can learn more about the Parliament of Hungary at the wiki page. We sat outside the Parliament and spend some time there before we decided to walk up to the city center as we already returned to the Pest side. 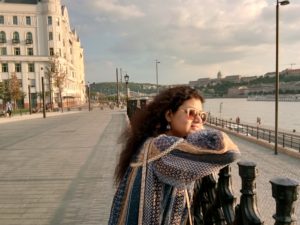 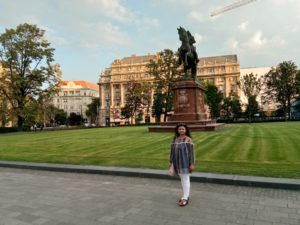 As we began walking towards the city center navigating the Budapest map, we came across number of beautiful known and unknown locations, mostly the holocaust memorials, parks, amazing architectures and statues. We spend some time at the most happening place – the Budapest city center called Erzsébet tér, it’s the place where you have a pool, park, flea market and lots of eateries around. 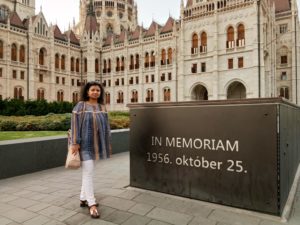 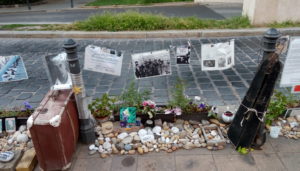 We headed back to the house before nightfall so we can cook the super tempting sausages we bought from the Central Market and enjoy an early sleep. Oh! Thought to add this, we didn’t buy cooking oil (or olive oil), because most shops sell big bottles and it was impossible to carry a big bottle of olive oil, so my wife (a very wise woman) used the bacon cubes to fry and squeeze out oil from it to cook the sausages. And she followed the same procedure in the whole 26 days trip in different parts of Europe for cooking different types of dishes including Indian curries. You may use this idea if you like bacon, my wife loves it. And, that was a beautiful AirBnB we got, really enjoyed our stay. 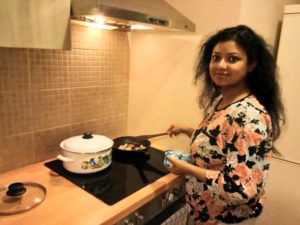 Day 2: Writing In Progress. Till then watch our Vlog!