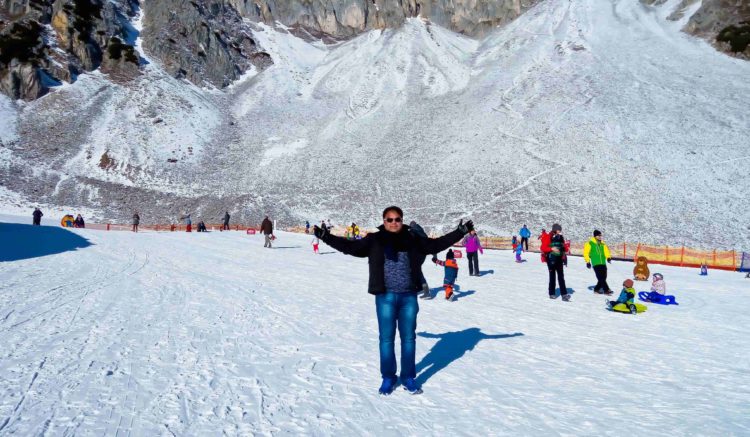 A Full Day Complete Guide of Innsbruck from our experience – An Alpine Day!

Innsbruck is widely known as the Capital of Alps and that’s absolutely true. You have to go to Innsbruck to touch the Alps!

We couldn’t spend long in Innsbruck because we had a very tight itinerary in that trip, which we thoroughly regretted. We should have spent at least two or three days to soak into the amazing natural beauty of the Alpine capital-town. We had a day trip to Innsbruck (Austria) from Munich (Germany) and we just loved it.
Nordkette – The Austrian Alps 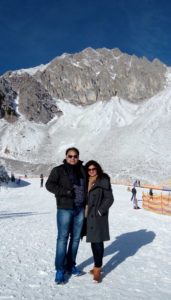 We began our journey at 8 am in the morning from the Munich Bus station (Munchen ZOB) in Hackebrucke and traveled with Hello Bus, the ticket fare was € 8.00 for one person. It was a ride of little more than two hours through the countryside of Germany and Austria. How you get closer to the Alpine region, the mountains start appearing from the lap of the sky. We visited Innsbruck in the winter just after Christmas and we had a clear and sunny day, though it was quite cold and windy.​ 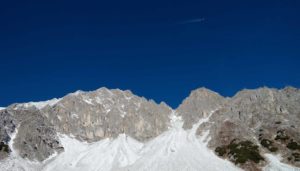 When we reached Innsbruck HBF in Verladestelle – the main bus station, we looked for the tourist information center and we were guided by the locals to a particular shop inside the HBF to get the Innsbruck-Card. The store looks more like a souvenir shop, but they are authorized to sell the Innsbruck card – a pass which essentially covers all the main tourist attractions of the city and ride on the Hop-On Op-Off bus for the city tour. The man in the shop (looks like the owner) was very helpful and patient. He helped us to prepare our new itinerary for the day based on our interest. We bought two Innsbruck cards for me and my wife which costs around € 78 and that included the Nordkettenbahnen cable car ride to the top of the Nordkette – known as the ‘Jewel of the Alps’ and also a visit to the Swarovski Museum and unlimited ride on all the public transports in the Innsbruck city. 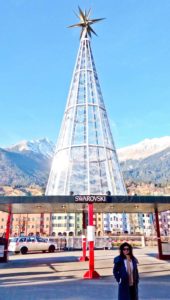 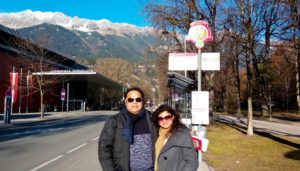 When we reached to the Nordkettenbahnen cable car station at the Congress bus stop, we had to wait in the queue for a little while for the cable car to arrive from the hill-top. It was a 15 to 20 minutes ride with few stops for the locals, who I guess live in the valley (what a life). The view was splendid from the cable car as we got close to the top of the hill. Gradually, the hill began to change it’s colour – patches of snows everywhere, white mountain peaks all around, hikers and climbers making their way by foot to the top, snow-capped tall pine trees and the sky is lighten up with the combination of snowy peaks and bright sunlight of late morning. That was some breath-taking beauty! 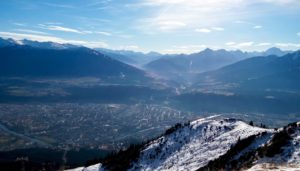 When we stepped out of the cable care at the Nordkette hill-top, it was literally freezing yet the atmosphere had a warm feel because of the bright sun. And, the beauty was unexplainable, words can’t express such beauty. A snow mountain or a snow valley was not something new to us, being Indians and born in Kolkata, we both have been to many Himalayan hill-stations. Changu Lake (Lake Tsomgo) in Sikkim was an awesome experience for us. But as the experts say, every hill has its own character and its own beauty, so does the Nordkette mountain range of Innsbruck. 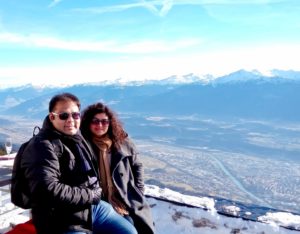 You will find a weather controlled restaurant called Alpenlounge Seegrube at the hill-top beside the cable-car station and a bar outside called Cloud 9, which has rows of chairs to sit and soak into the sun light – a great interest of Europeans as they don’t get sun for most of the months of the year unlike us in India. Me and my wife skipped the bar and sun-bath scene to get to the snow-bed ski valley. It was really fun walking on the long stretch of snow covered mountain valley. It’s a bit slippery with ordinary shoes, but if you walk slowly and carefully you will be fine. 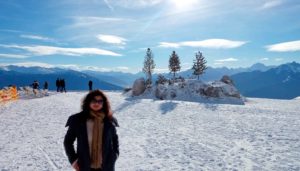 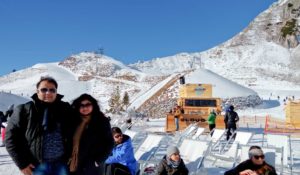 Many locals and tourists bring their kids here to introduce them to skiing. They even have a setup for the kids to master the basic level of skiing under the guidance of parents. The view is spectacular from this level as I have mentioned earlier – the snowy peaks all around and you can see the city of Innsbruck right at the foot of the hill and the Inn River is flowing along the natural cityscape. We were so mesmerized in the breath taking beauty that we completely forgot about the bus we supposed to catch from the Congress bus stop around 12:30 pm for the Swarovski Museum. By when we realized about the time, it was too late. Anyway, we believe, it calls for another trip to Innsbruck someday, which we wouldn’t mind at all. 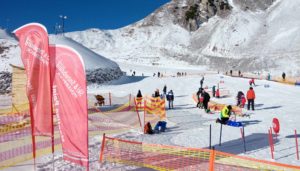 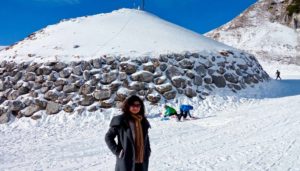 As we couldn’t make it for the Swarovski Museum, we decided to spend the afternoon at the famous Old Town of Innsbruck, which is superbly designed with colourful buildings centuries ago – a brilliant example of the old Tyrolese architecture. The narrow alleys are filled with eateries and souvenir shops, which is quite charming. But, if you are on budget, you might not find many cheap places to eat. Like any hill station in Europe, Innsbruck is quite expensive, almost like Zurich, but certainly expensive than other Austrian cities namely Vienna and Salzburg. We had packed food with us because we didn’t want to waste time in eating as we were there for a day only, so we can’t really talk about the Food in Innsbruck other than the delicious Rat-shaped cake we had in the Old Town. 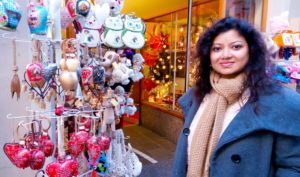 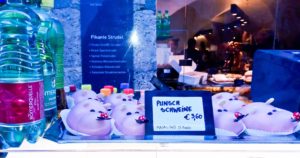 As we had the whole afternoon in hand, we decided to walk by the ‘Inn River’ and look around the city on public transport as our Innsbruck card permits us a free access to all the buses and trams. Walking beside the Inn River under the afternoon-sun was a real pleasure, a warmth comfort in a freezing weather was much needed. The legend says that, in the earlier days there was no bridge on Inn River and locals used the river to travel for trade as far as the Black Sea through River Danube. Innsbruck precisely means ‘the bridge over the Inn River’. Visit the official Innsbruck website to know more about Inn River.
Inn River 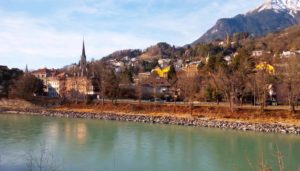 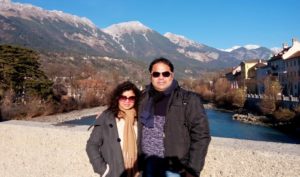 We then moved on to another attraction of the city, the Maria-Theresien-Straße. This is the main center of the city with spectacular Baroque and Rococo architecture all around the street, luxury boutiques and cafes. The Maria Theresien Street is the perfect place to hang out with your partner and children, do take rest near St. Anne’s Column if tried walking for long and enjoy the a long view on the peaks of the Nordkette mountain range. 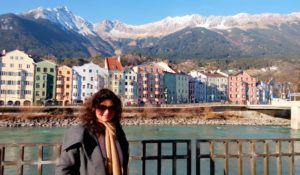 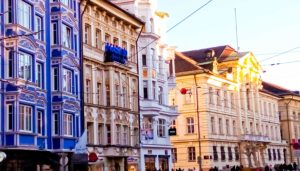